Women’s Periodicals in the United States: Social and Political Issues

Women’s Periodicals in the United States: Social and Political Issues is a collection of alphabetical entries written by different scholars on various women’s publications that existed in the 19th and 20th centuries. For each periodical that it covers, this book provides history and background information, circulation numbers, and a bibliography that points readers to more information about it. Periodicals in the United States shows the diversity of women’s voices on the political and social issues of the day.

The topics that the chosen periodicals covered vary, but a number of entries deal with suffrage.

Sherilyn Cox Bennion explores the publications The Pioneer and The Queen Bee, both of which were pro-suffrage publications in the western United States.

Therese L. Lueck, a co-editor of the book, authored the entry on Woman’s Journal, a publication of the American Woman Suffrage Association.

The book also covers two periodicals that opposed suffrage: Lueck wrote the entry on The Anti-Suffragist, created by the New York State Association Opposed to Woman Suffrage; and Elizabeth Burt wrote about The Remonstrance, a big voice in the anti-suffrage movement. Excerpts of book’s entry onThe Remonstrance can be found here.

For more information on how periodicals covered suffrage, see Tracy Kulba and Victoria Lamont’s article “The Periodical Press and Western Woman’s Suffrage Movements in Canada and the United States: A Comparative Study“;  the book A Voice of Their Own: The Woman Suffrage Press, 1840-1910; Linda Steiner’s “Finding Community in Nineteenth Century Suffrage Periodicals“; “A New Generation,” in Women of the Washington Press: Politics, Prejudice; and Persistence; and Women and The Press: The Struggle for Equality.

You can find excerpts of Women’s Periodicals in the United States on Google Books and Questia, and you can purchase the book on Amazon. 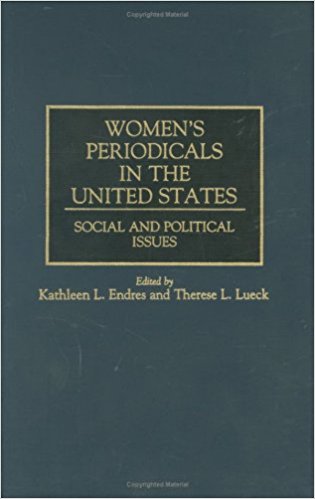