A Voice of Their Own explores the consciousness-raising role of the American suffrage press of the latter half of the 19th century. From the first women’s rights convention, a modest gathering of 300 sympathizers led by Elizabeth Cady Stanton, grew the ever-expanding movement for equal rights, greater legal protections, and improved opportunities. Although the leaders of that and subsequent conventions realized that such public rallies, with their exhortative speeches, were crucial in gaining support for the movement, they also recognized the potential impact of another medium: woman’s suffrage periodicals, written and published by and expressly for women.

The 11 essays of this volume demonstrate how the suffrage press—in such forums as Woman’s Journal, Woman’s Tribune, Woman’s Exponent, and Farmer’s Wife—was able to educate an audience of women, create a sense of community among them, and help alter their self-image.

A Voice of Their Own won the 1991 Myers Center Outstanding Book Award, sponsored by Gustavus Myers Center for the Study of Human Rights in North America.

Reviews of the book:

The book is especially valuable in that it traces changes in the women’s movement from an emphasis on a new self-image for woman to suffrage. . . . [The] writing is straightforward and clear. Documentation is superb. Endnotes are helpful guides to seminal works in women’s journalism. The index is useful and the bibliography is excellent.

An excellent collection of articles exploring the role of journalism in creating, maintaining, and developing the analysis and membership of the first wave of American feminism.  Drawing on theories of social movements from the discipline of communications, this volume, expertly edited by Martha Solomon, begins with the relationship between the suffrage movement and newspapers,…[and] seven useful case studies follow.  Historians will benefit from this volume’s meticulous documentation of a plethora of publications and its discussion of their rhetorical strategies.

—Signs: The Journal of Women in Culture and Society

You can purchase the book through the publisher’s website.

For more on women journalists and suffrage, see “A New Generation,” in Women of the Washington Press: Politics, Prejudice, and Persistence and Women and The Press: The Struggle for Equality. 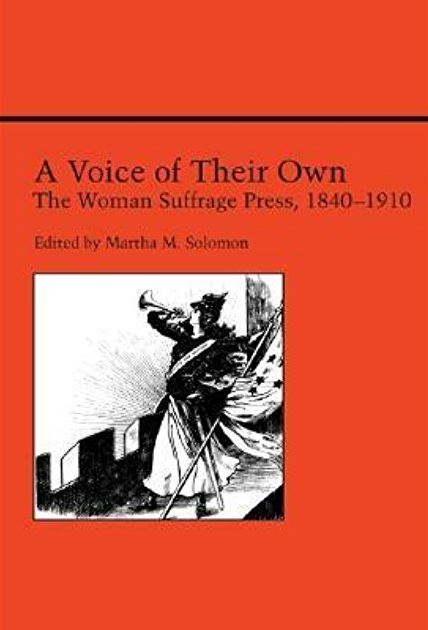