Woman on Fire is an original play showing August 20-26 at the 2017 Edinburgh Fringe Festival.

Presented by the award-winning Certain Curtain Theatre company, Woman on Fire recounts the turbulent life and times of the suffragist Edith Rigby—mild-mannered doctor’s wife with a secret identity as an (alleged) arsonist, bomber, and jiujitsu-trained militant suffragette. Jailed six times, she went on hunger strike almost to the point of starvation. Released, she went toe-to-toe in ferocious pitched battles with the police. Written and directed by John Woudberg and performed by Claire Moore, the play presents both sides of this eccentric and often-overlooked woman.

From the show’s description:

An explosive one-woman show, taking you into the fiery spirit and turbulent times of one of the most passionate and singularly dangerous women in Edwardian England—Mrs Edith Rigby. Present at the tempestuous birth of the suffragette movement, she became a major player in the violence of its unfolding. Mild-mannered doctor’s wife, guerrilla fighter, vandal, arsonist and suffragette bomber, this outrageous woman remains an enigma to this day. Woman on Fire seeks to shed light on the mystery that is Edith Rigby.

“The story of Edith Rigby remains largely unsung,” says Moore. “She is best known for burning down Lord Leverhulme’s house in Rivington, but she was a woman of ‘firsts.’ She was the first woman, in Preston, to ride a bicycle—in bloomers! She founded Preston’s first branch of ‘The Women’s Social and Political Union’ and devoted her life to improving the lives of girls and women locally and nationally. She was shunned by neighbours, but her fiery spirit was not easily dampened. Her story and the wider suffragette struggle is one worth sharing and I hope audiences agree.”

Venue:  The Space on North Bridge (Venue 36), Edinburgh, Scotland
Dates: 7-26 August 2017
Time: 12:55 (50 mins)
Box Office Website
You can read more about militant suffragist tactics in the UK here. Those intrigued by Rigby’s knowledge of jiujitsu may be interested in the graphic novel trilogy Suffrajitsu: Mrs. Pankhurst’s Amazons, a work of fiction based on real historical events, including pioneering women’s self-defense programs within the British suffrage movement. 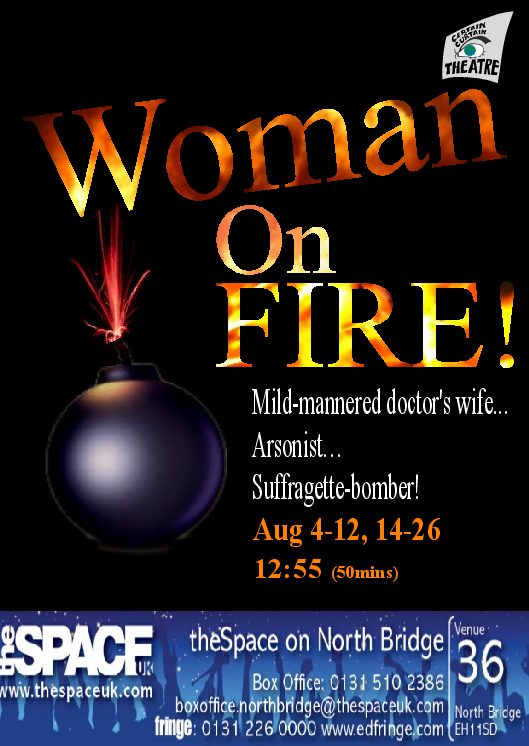