“Self-Defense in the Era of Suffrage and the New Woman,” in Her Own Hero: The Origins of the Women’s Self-Defense Movement

The fight for women’s voting rights is not the sole topic of Wendy L. Rouse’s 2017 book Her Own Hero: The Origins of the Women’s Self-Defense Movement, which chronicles the emergence of the women’s self-defense movement early in the 20th century. But the 288-page work’s fourth chapter, “Self-Defense in the Era of Suffrage and the New Woman,” does explicitly explore, as Rouse puts it, “how women studying jiu-jitsu and boxing in the early 1900s associated their bodily empowerment with their political empowerment” through the suffrage movement.

Routh’s broader thesis in Her Own Hero places women’s fights—both with their fists and for the vote—in the larger historical context of women’s changing social and political roles during the Progressive Era. As Routh describes it in an excerpt from the publisher’s website:

Through self-defense training, women debunked patriarchal myths about inherent feminine weakness, creating a new image of women as powerful and self-reliant. Whether or not women consciously pursued self-defense for these reasons, their actions embodied feminist politics. Although their individual motivations may have varied, their collective action echoed through the twentieth century, demanding emancipation from the constrictions that prevented women from exercising their full rights as citizens and human beings.

Routh is a professor at San Jose State University, where she teaches social science teacher preparation and United States history. Her research examines, among other topics, gender history during the Progressive Era.

Beginning July 14, 2017, Her Own Hero will be available in hardcopy and as an e-book. You can purchase the book from the publisher here, or here via Amazon.com. You can also read the book’s introduction here.

For a fictional story based in part on a real-life British secret society of suffragette bodyguards, see the graphic novel trilogy Suffrajitsu: Mrs. Pankhurst’s Amazons.

If you’re interested in a more extensive account of some British suffragists’ use of militant tactics, see Andrew Rosen’s Rise Up, Women!: The Militant Campaign of the Women’s Social and Political Union, 1903-1914. 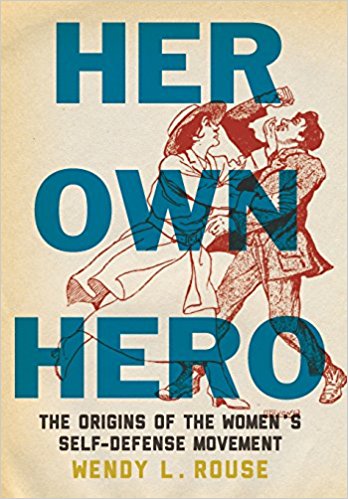