WOMEN’S SUFFRAGE AND THE MEDIA

Links to the articles in the issue are found here. Taylor & Francis has opened access for the period April 15-July 15, 2019.

Key to the eventual triumph of the campaign after seven decades of struggle was its effective use of media in myriad forms, among them, publications, posters, postcards, and news releases to invite coverage of its parades, pageants, mass meetings, protests, and pseudo-events. Just as important, especially in the campaign’s final decade, was the editorial support the movement began to enjoy from popular mainstream newspapers and magazines.

The special issue opens with a state-of-the-field essay on the suffrage movement and the media, followed by five new offerings to its canon. The first explicates the philosophical and editorial postures of two dedicated suffrage publications as seen through their respective uses of poetry and fiction. The next two essays examine the disparate ways three progressive-to-radical small press magazines exhibited their movement support. The final two essays assess the reporting and biased responses of the mass circulation press to aspects of the pro- and anti-suffrage campaigns. Deliberate, unconscious, and reflexive media messaging is the three-strand thread that bastes the five essays together. This emerges from the editorial choices of two major suffrage journals, in the suffrage coverage of three sympathetic small press magazines, and in the responses of mass circulation newspapers to the efforts, ideas and actions of suffragists and anti-suffragists at two specific points.

“Historiography: Women’s Suffrage and the Media” 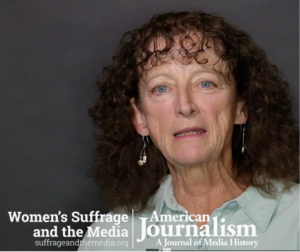 Dr. Lumsden introduces our special issue with her prodigious historiography of suffrage and the media research across the past half-century. Decade by decade, she traces the scholarly research trends—and gaps—from the recovery efforts in the 1970s, through the cultural-historical and media coverage analyses in the 1980s, to intersectional approaches of black feminist scholars in the 1990s that challenged earlier accounts. As the century turned, scholars considered suffragists’ contributions to consumer culture and cast a critical eye on the visual rhetoric of spectacle in the form of parades and the White House pickets. By 2017, as the national centennial celebration commenced, three new books reflected on “the golden media effect” of elites with style, money and celebrity-like appeal who became engaged with the movement in its final decade. Much suffrage media research has been piecemeal, Lumsden argues. She calls for fresh comprehensive examinations of how U.S. suffrage print culture drew women into the public sphere and changed them both. Video link here and posted below.

Suffrage Issues and Feminist Ideas in the Crisis and the Masses” 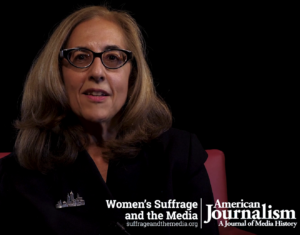 Developing racialist themes more broadly, Dr. Grasso takes on the “differently radical” approaches to the suffrage question of the NAACP’s the Crisis, under the leadership of W.E.B. Du Bois, and of the Masses under editor Max Eastman. She underscores the “radicalized racialism” of the 1910s as manifested in these two magazines, one with a black readership, the other with a white one. They were as united in their support for women’s suffrage as they were divided by their distinct political imperatives. Grasso’s close look at the 1915 suffrage issues of both magazines illustrates their divergent perspectives on gender discrimination and disenfranchisement. “When examining suffrage media rhetoric,” Grasso writes, what’s important is to consider “race in gendered radicalism and gender in race radicalism.” Video link here and posted below.

The Newspaper Coverage of the Suffragists Hike to Albany,” 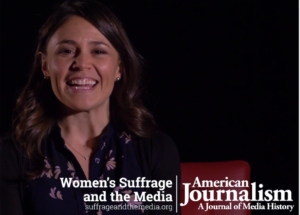 Dr. Lewis acknowledges that the welcome avalanche of mainstream press coverage of New York’s suffrage hikers indeed subverted aspects of the suffragists’ purpose. For as the women walked the 170 miles from New York City to Albany in December 1912, the press often mocked and made light of their trek. She further contends that by portraying their pilgrimage as a journey of “adventurous, determined, and emotional heroines of an action-packed serial,” the press managed to publicize, represent and domesticate the meaning of the women’s public mobility in a way that made their activism seem less alarming and more intriguing. Video link here and posted below.

“Covering a Countermovement on the Verge of Defeat:

The Press and the 1917 Social Movement Against Woman Suffrage” 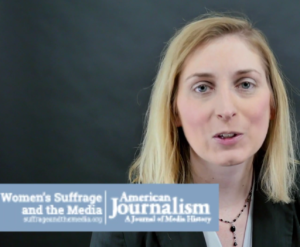 Finally, no new research on suffrage and the media would be complete without attention to the anti-suffragists, which Dr. Finneman provides with her work on local press coverage of the antis in the critical year of 1917, when their efforts neared defeat. Through the use of textual analysis and framing, and social movement theory, Finneman’s essay enhances the literature on press portrayals of counter-movements. Video link here and posted below.

“Fiction and Poetry in the Revolution and the Woman’s Journal: 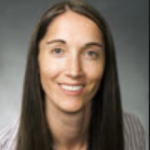 Dr. Easton-Flake begins to answer Lumsden’s call. She analyzes—in tandem for the first time—the literary works that appeared in the Revolution, the organ of the National Woman Suffrage Association, and the Women’s Journal, published by the American Woman Suffrage Association. Easton-Flake finds that the fiction and poems were an integral part of each journal’s polemics as the fiction and poems they published articulated and advocated their organization’s respective views of the new woman and the changes most needed for her advancement. READ MORE 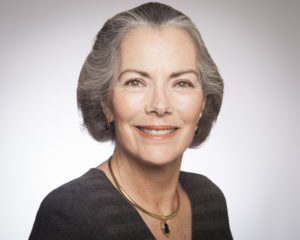 Dr. Unger’s analysis of the “big tent” yet “Janus-faced” suffrage arguments promoted by Bella La Follette in the pages of La Follette’s Magazine, demonstrates how, over two decades at the start of the twentieth century, La Follette deftly melded social justice and expediency arguments with the aim of attracting as diverse an array of suffrage supporters as possible. This included La Follette’s willingness to chide middle class white suffragists for their overt racism. While Unger concludes that the wide-ranging arguments of La Follette and others helped bring the Nineteenth Amendment to fruition, “they also reinforced lasting cultural, political, economic, ideological, and social differences between the sexes and among women.” READ MORE

—Brooke Kroeger, for the team