The Suffrage Roots of Wonder Woman

As Jill Lepore explained in a 2014 interview on the NPR program “Fresh Air,” her book, The Secret History of Wonder Woman, chronicles the iconic superheroine’s suffragist roots. Lepore’s exploration of Wonder Woman creator William Molton Marsten’s involvement in women’s suffrage is capsulized in an NPR Books review by Etelka Lehocky. It began while he was a student at Harvard and, as a member of the Harvard League for Woman Suffrage, he joined a vociferous 1911 protest by students and alumni against the university’s refusal to allow the militant British suffragette Emmeline Pankhurst to speak on campus. Lehocky writes:

Marston had been a committed feminist for decades by the time he created Wonder Woman in 1941. He’d been exposed to the women’s suffrage movement while in college, and Sadie Holloway, whom he married in 1915, was “something of a revolutionary,” Lepore writes. 25 years later, Marston’s determination to depict Wonder Woman in chains was partly inspired by women’s suffrage imagery. (He had a rather forced argument for why the chains actually represented liberation.) Wonder Woman’s first artist, Harry G. Peter, had himself once drawn suffrage cartoons.

Lepore wrote about Wonder Woman for the New Yorker in a piece titled, “The Last Amazon,” in which she talks about Marston’s suffrage connection. Among the many reviews and notices of Lepore’s book are those that have appeared in the New York Review of Books, the Nation, and the New York Times. 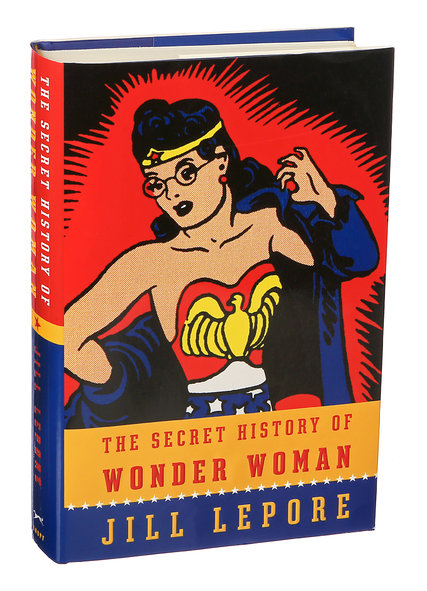