The satirical magazine Puck was one of the most influential American publications of the late 19th and early 20th centuries. Making liberal use of cartoons and drawings, Puck gave its readers an irreverent mix of current events, pointed social commentary, political opinion, and often-scathing criticism of the day’s prominent figures.

Although in earlier years Puck had ridiculed the idea of women’s enfranchisement, the magazine took the opposite tack with its February 20, 1915 “Suffrage Number.” Conceived as part of a massive mobilization campaign in support of a 1915 referendum to grant New York women the vote by amending the state’s constitution, the issue was a full-throated, heavily promoted endorsement of women’s right to vote. Puck enlisted the aid of a raft of major suffrage organizations and invited prominent pro-suffrage media figures to serve on a board of honorary editors. The issue borne of this collaboration devoted virtually all its content—including some of the most enduring imagery of the suffrage era—to the topic, and proved a milestone in the campaign for women’s enfranchisement.

Though the constitutional referendum failed that year, it gave momentum to the cause. New Yorkers voted their approval of a similar measure two years late in November 1917.

“Puck joined the charge, devoting almost the entirety of its February 20 issue to the subject of suffrage. The magazine ceded editorial direction for that month to the state’s major suffrage organizations, including the Men’s League for Woman Suffrage, as prominently noted in the upper right-hand corner of its cover next to a sumptuous full-color illustration, titled “The Mascot.” The image depicted a young woman and a girl toddler, each draped in bright yellow “Votes for Women” sashes. A juggernaut of an editorial board came together to oversee the issue, dominated by Men’s League stalwarts: Oswald Garrison Villard of the New York Evening Post; Peter Finley Dunne aka “Mr. Dooley”; Arthur Brisbane of the New York Journal; Norman Hapgood, by then running Harper’s Weekly; Erman J. Ridgway of Everybody’s; William Dean Howells; S.S. McClure; Ogden Mills Reid of the New York Tribune; Irvin S. Cobb; John O’Hara Cosgrave of the New York World; and Frank Munsey of Munsey Publications. Cartoons, aphorisms, editorials, magnificent four-color illustrations, plenty of satire, and sufficient ridicule of the antis filled the issue. A note from the editor promised that Puck would keep hammering away at the subject week after week, ‘from now until the battle for woman suffrage is won’.”

You can also browse decades’ worth of other archived Puck issues here, via the HathiTrust Digital Library.

For more background on Puck and its political cartoons, see this article from Sidesplitter.

If you want to view and read more about iconic images from the suffrage issue, see “The Awakening” and “The Mascot.” 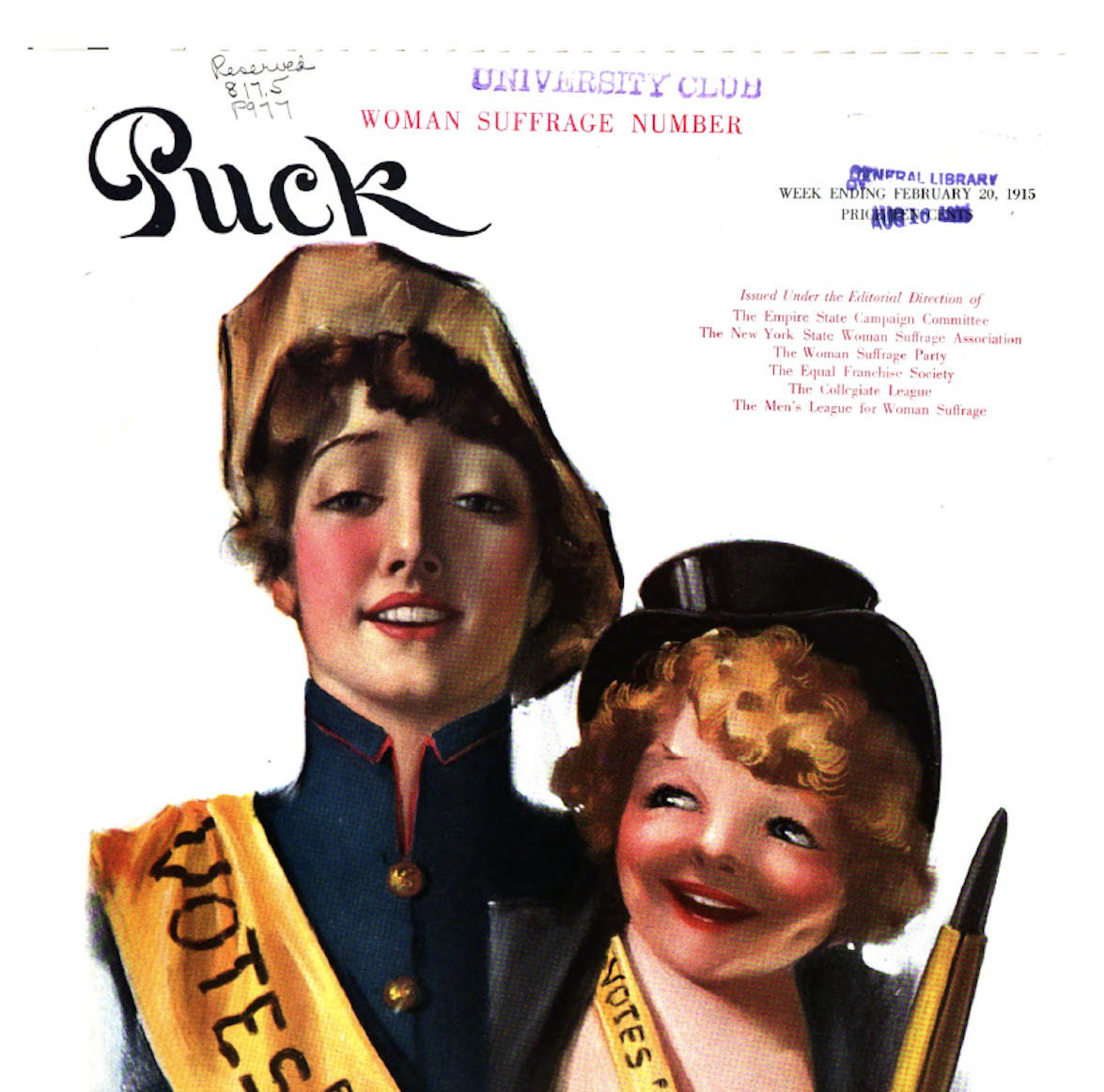 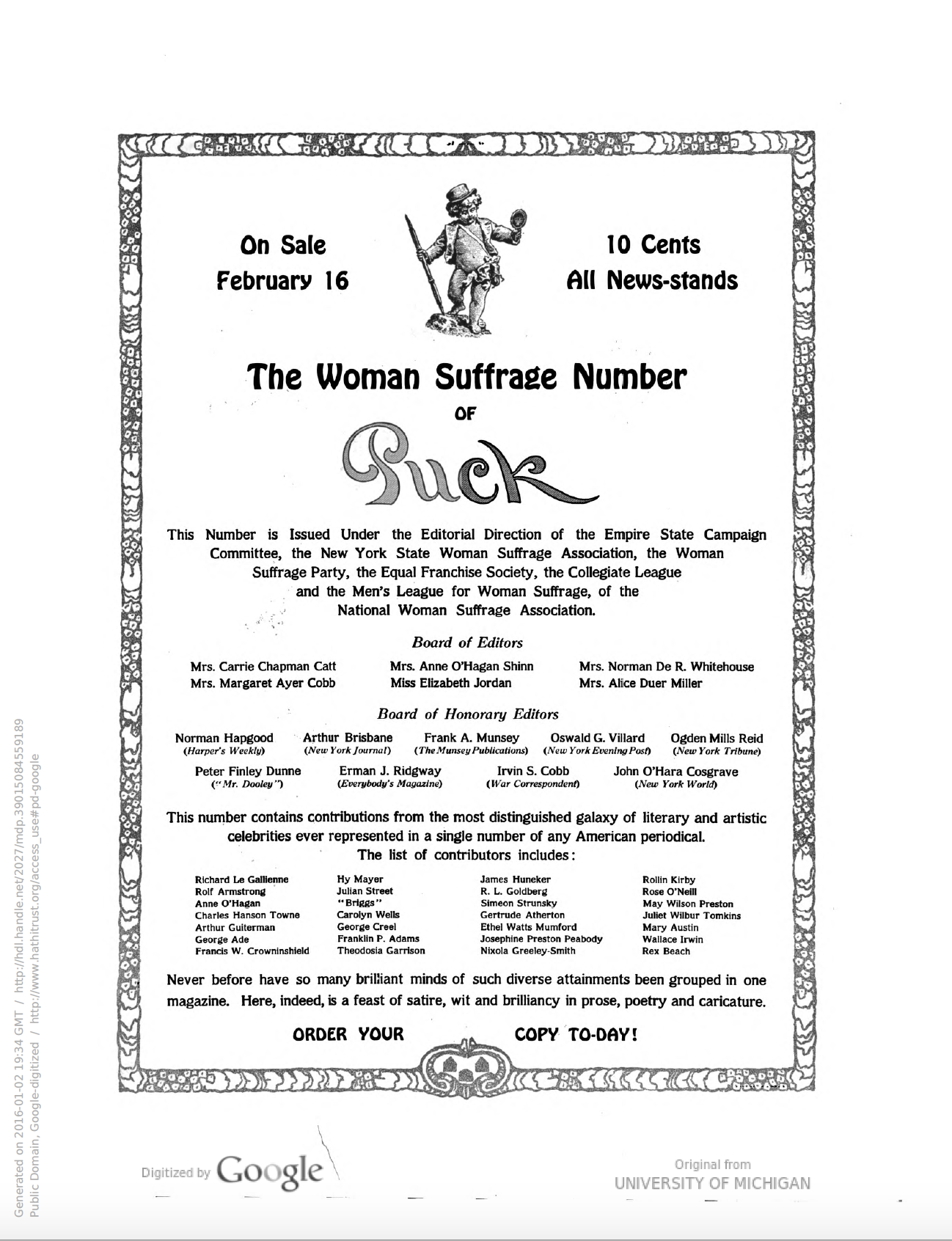 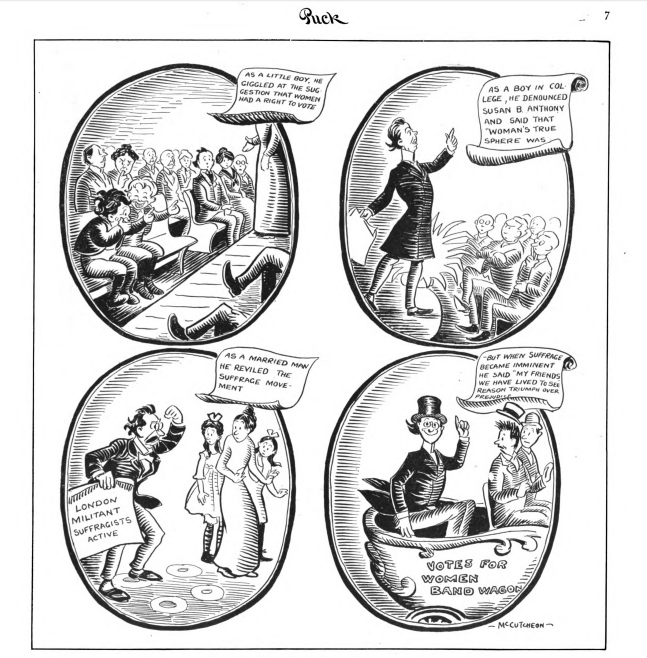