2020 marks the 100th anniversary of the passage of the 19th Amendment, granting women the Right to Vote. This centennial offers an exceptional and unprecedented opportunity to commemorate this political victory and to remember that this victory was won by a 72-year long struggle and campaign for the vote. In addition, this centennial honors and pays tribute to those women (and men) and to the great cause to which they were dedicated. This groundbreaking Constitutional amendment not only expanded our democracy to include all women, but also protects women’s right to vote.

The 19th Amendment: “The right of citizens of the United States to vote shall not be denied or abridged by the United States or by any state on account of sex. Congress shall have power to enforce this article by appropriate legislation.”

Years Of Hope. Years Of Courage.

The Women’s Suffrage Movement was a long and difficult struggle–from the first declaration of the demand for the right to vote in Seneca Falls, NY, in 1848 to the final ratification of the 19th amendment on August 26, 1920. The driving forces of this 72-year campaign were justice and hope. Justice for the cause of equality and the American promise of liberty and justice for all.

Pasadena Celebrates 2020, this important Centennial, not only for its history but also for the present and future which this Amendment guarantees — the Right to Vote. We want to create a Centennial year where the story of the Suffrage Movement is revealed and those courageous and committed suffragists are brought out of invisibility.

Pasadena Celebrates 2020 is in a unique position to kick off this Centennial year with a float in the Tournament of Roses parade on January 1, 2020, a parade seen round the world. The Float’s theme is Years of Hope. Years of Courage; it will portray the long history to win the right to vote and its cardinal figures. Floats and parades were a major hallmark of how women brought attention to their cause. Parades were held in both large cities and small towns; suffrage floats were dramatic and stunning, featuring floral displays, art, and the constant demand for the Right to Vote. Our 2020 Float and presence in the Tournament of Roses Parade continues that tradition and illuminates this victory of equality.

Rendering of the Suffrage Centennial float: 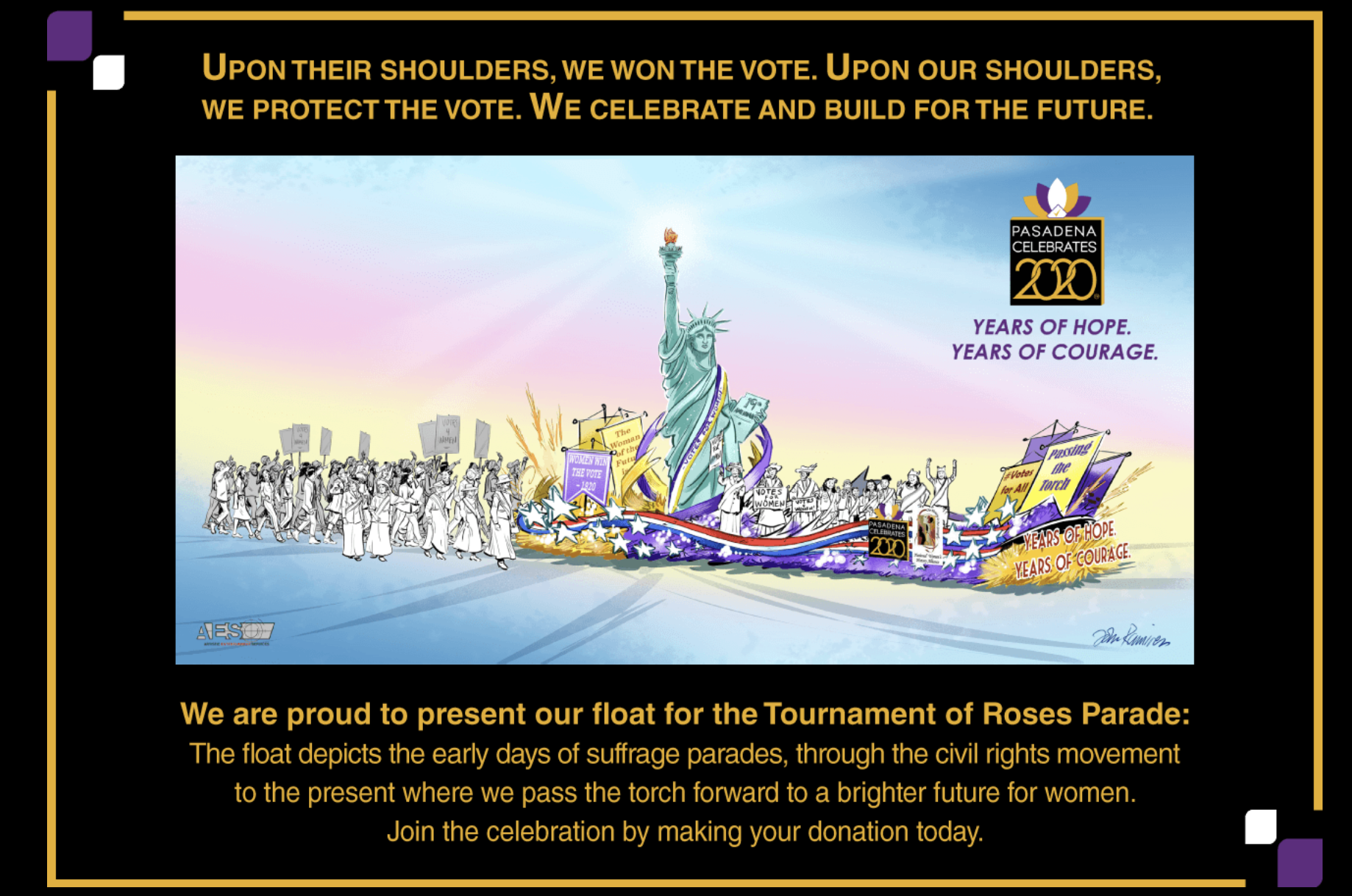 The decision of Democratic US congresswomen to don white for the State of the Union address February 5, 2019 occasioned stories about the color’s symbolism, notably in the Washington Post, the New York Times, and Time. CNN took up the topic in 2017 in this opinion piece by Louise Bernikow. 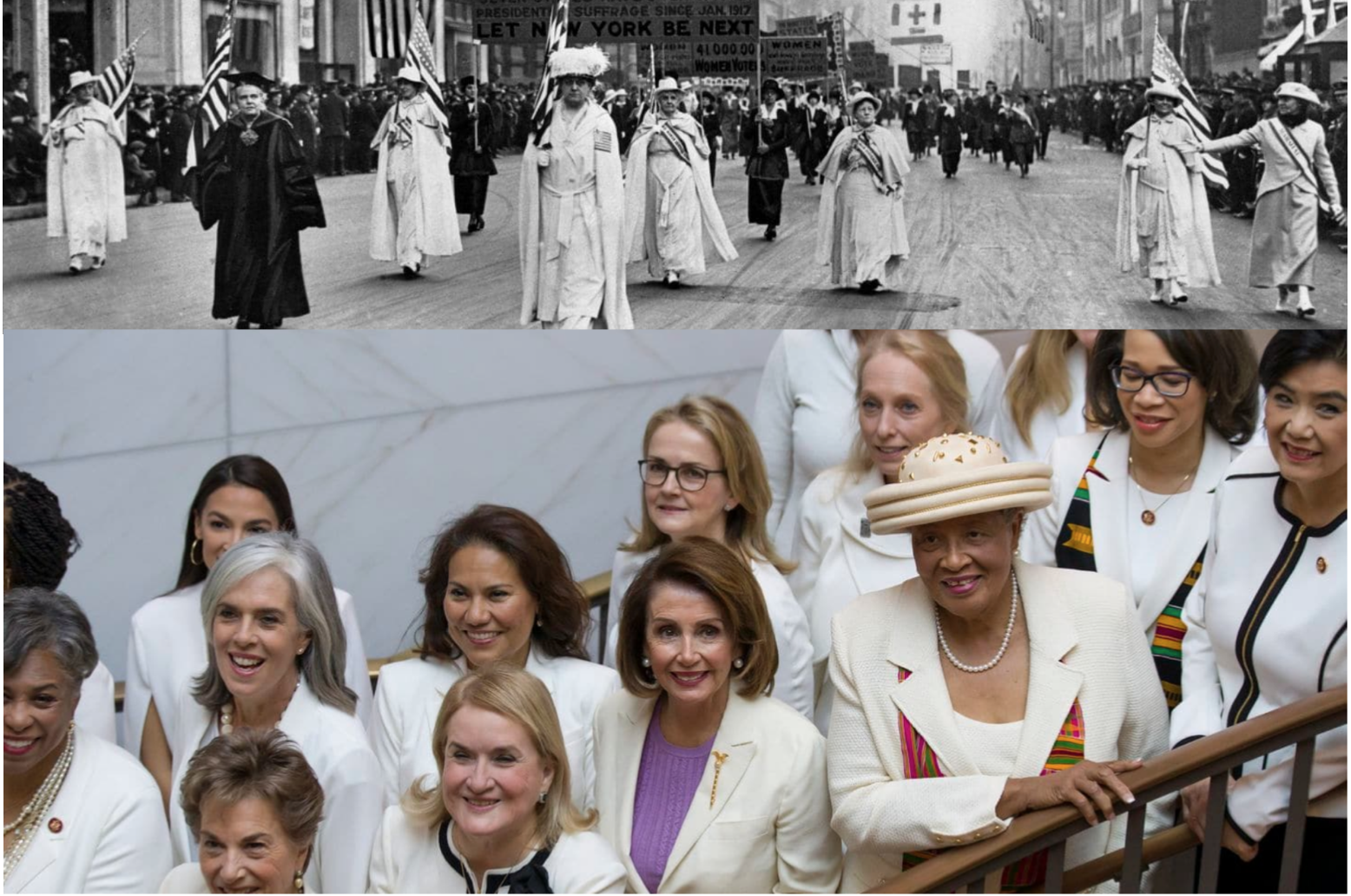 For a CNN opinion column, author Louise Bernikow looks at the colors ascribed to the fight for women’s rights and argues that although she understands the importance of “visual symbols of solidarity,” ascribing meaning to colors can lead to “peculiar and often misleading interpretations of history.” As an example, Bernikow looks at the white so often associated with the suffrage movement. She can also be seen and heard on a series of MOOCs for Columbia University and the New York Historical Society, with Bernikow and Alice Kessler-Harris, emerita professor of history at the university.

Up the Women is a BBC Two sitcom about British suffragists, created by and starring Jessica Hynes. It begins in 1910 and is centered on the women of the Banbury Intricate Craft Circle, who presently form a suffragist league.

About the sitcom (from BBC Two):

Up the Women was the last British sitcom to be filmed in front of a live audience at BBC’s Television Centre building. It ran for two seasons.

The Guardian called it a “hugely enjoyable” comedy about “women who meet regularly to eat cake, do their samplers and discuss the fight for equality.” Read the full Guardian review here.

Up the Women is available to watch online through Hulu.com.

This PBS documentary is a sweeping look at the women’s suffrage movement, from Elizabeth Cady Stanton’s famous Seneca Falls call to arms to the passage and ratification of the 19th Amendment, which granted women voting rights.

Narrated by Susan Sarandon, the documentary features historical photos and video clips of the suffrage movement, as well as a number of historians who provide needed context. The film also delves into the deep divisions within the suffrage movement, like the one over the question of whether to support voting rights for black men. In addition, the film looks at regional differences within the movement and differences over whether to use militant tactics.

The New York Times called the film “inspiring without being rhapsodic,” saying it tells viewers “as much about the exigencies of American politics as about the heroism of three generations of American women.” The National Women’s Studies Association Journal also published an informative review of the film, accessible through JSTOR.

You can buy the film through PBS, or order it through Netflix.

There is a companion book by the same name that you can buy on Amazon. The book is an anthology of contemporary and historical writing on women’s suffrage.

Ken Burns’ Not For Ourselves Alone: The Story of Elizabeth Stanton & Susan Anthony

This two-part documentary film shown on PBS tells the story of Elizabeth Cady Stanton and Susan B. Anthony, the duo that brought the suffrage cause to widespread attention in the United States.

The film, directed by Ken Burns, shows how the two leaders—despite their widely divergent personalities and backgrounds—came together to fight for women’s voting rights, though both died before their dream was realized.

Stanton grew up with wealth and privilege, the daughter of a well-known judge. Anthony grew up in a Quaker household, the daughter of a factory owner. The two met in 1851, and went on to found multiple suffrage organizations to advance their cause. As historian Judith Harper explains in a PBS article:

The two women not only developed a deep friendship but also helped each other prepare themselves to change women’s lives. Anthony thrived under Stanton’s tutelage—soaking up her knowledge of politics, the law, philosophy, and rhetoric. Stanton, confined to her home by motherhood (she gave birth to her seventh and last child in 1859), was stimulated by Anthony’s thoughtful critiques of her ideas.

Burns’ film traces their personal lives, places them in historical context, and underscores how the impact of their activism stretched far beyond their deaths.

The documentary garnered positive reviews in Variety and the New York Times, which latter called it “a vibrant and extremely moving portrait of a lifelong friendship and the political strategies that defined the women’s rights movement.”

The PBS website on the film is filled with teaching resources, companion articles, and historical documents. The IMBD entry contains a list of the experts featured in the film.

You can buy the film from PBS or Amazon, or search on WorldCat to see if your local library carries it.

Burns and Geoffrey Ward also wrote a companion book to the film which is also available on Amazon.

This short BBC News video from 2016 introduces a sculpture, housed in the British Parliament, that celebrates women’s suffrage in the United Kingdom. The work, titled “New Dawn,” is made of metal and illuminated glass whose lighting ebbs and flows in time with the tides in the nearby River Thames. The video also uses archival footage and photographs to look back at the women’s rights movement in the UK.

“New Dawn” was unveiled on June 7, 2016. The date marked the 150th anniversary of Member of Parliament (and famous philosopher) John Stuart Mill’s presentation to the House of Commons of the first mass petition advocating women’s enfranchisement. An excerpt from the UK Parliament’s website describes the watershed event:

Mill spoke on the petition on 17 July 1866. A year later, the petition led to the first debate on votes for women. On 20 May 1867 Mill tried to amend the Second Reform Bill to replace the word ‘man’ with ‘person’. He later described this as ‘perhaps the only really important public service I performed in the capacity as a Member of Parliament.’ The division was lost by 73 votes to 196, but Mill was delighted by the level of support, which came from both sides of the House.

St. Stephen Hall, the portion of Westminster Hall chosen to house the sculpture, was a frequent rallying point from which suffragettes protested and lobbied Parliament for the vote. The piece was created by artist Mary Branson.

You can view and explore “New Dawn” here, watch five short videos about it here, and learn more about the sculpture’s creation here.

You can also explore another important contribution Mill made to the suffrage movement: his May 20, 1867 speech before the House of Commons on the subject of women’s enfranchisement.

Iron Jawed Angels is a made-for-TV historical drama that tells the story of how a key leader in the US suffrage movement, Alice Paul (played by Hilary Swank), took the voting rights fight to Washington, DC. The movie first premiered at the Sundance Film Festival in January 2004 before being shown on HBO.

The film follows Paul and fellow militant activist Lucy Burns as the pair clash with old-guard suffragists from the National American Woman Suffrage Association—or NAWSA—over tactics and strategy. Paul and Burns wanted, for instance, to push for an amendment to the US Constitution guaranteeing women’s voting rights. (Though it also lobbied Congress for a constitutional amendment, NAWSA put at least as much energy into its parallel effort to change the constitutions of individual states.) Paul and Burns break off from NAWSA and eventually turn to confrontational protests that land them in jail.

The movie shows how, while locked up in the Occoquan women’s prison in Virginia, Paul and her National Woman’s Party co-activists go on a hunger strike and are force-fed in response—hence the moniker “iron-jawed angels.”

The official website for Iron Jawed Angels is informative, filled with links to reviews, a detailed synopsis, video clips, and information on where to buy the movie. You can also see the movie’s IMDB page for more information.

An academic review of the film, written by Kristy Maddux, appeared in the February 23, 2009 issue of the journal Feminist Media Studies (vol. 9, issue 1), pp. 73-94. You can access the review’s abstract—and purchase access to the full piece—here, via Taylor & Francis Online.

C-SPAN Video: The Role of the Media in Women’s Suffrage

C-Span offers the video and a transcript of this event. The video is also embedded below.

A panel of journalists, authors, and academics gathered at the National Press Club in 2013 at an event honoring the 100th Anniversary of the 1913 Women’s Suffrage March on Washington, DC. On the panel, moderated by Eleanor Clift, were Jill. D. Zahniser, author of Alice Paul: Claiming Power; Erika Falk, author of Women for President: Media Bias in Nine Campaigns; and Rosalyn Terborg-Penn, author of African American Women in the Struggle for the Vote, 1850-1920.

The panelists discussed the role of the media in the women’s suffrage movement, how newspapers became the locus of much of the debate over women’s rights, and how the press both helped and hurt the cause.