NAWSA, gearing up again for the new campaign, was in need of a fresh slogan. ‘Woman Suffrage Is Bound to Come’ had outlived its usefulness. A twenty-five dollar prize would go to the perfect tag line. Men’s League members on George Creel’s publicity committee dominated the judging: Cosmopolitan editor Edgar Sisson; Mark Sullivan of Colliers; John Cosgrave of the New York World; Robert Hobart Davis of Munsey’s; and Frank Crowninshield of Vanity Fair, who had shared in Puck’s February 20, 1915, suffrage issue about how the antis had converted him to the prosuffrage side by omitting any reference in their arguments to how many women worked outside the home. The winning entry:

THE WOMAN’S HOUR HAS STRUCK.

—Adapted from Brooke Kroeger, The Suffragents: How Women Used Men to Get the Vote. Excelsior Editions/SUNY Press 2017, p.189 n.p. 323  Information is from the Arkansas City Daily Traveler, 7 September 1916 p. 4, available through newspapers.com on this page.

Here is a downloadable image of the poster, which is in the public domain. 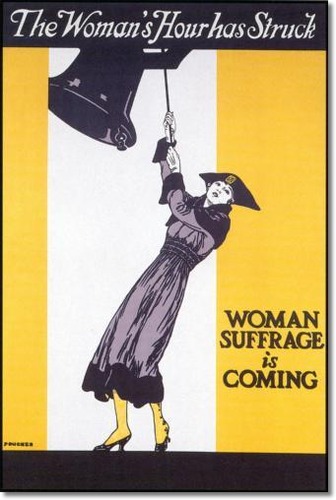