The Women Who Drew for Suffrage

Sheppard’s work details this forgotten history, challenging stereotypes in the process and exploring artistic gems like the work of Lou Rogers, whose work was featured in prominent magazines of the era like the satirical publication Judge. The political cartoons Sheppard discusses–she includes 200 of them in her book–were drawn to subvert stereotypes of suffrage activists as seductresses or shrews.  As this informative Chicago Tribune book review notes, the author details the two strategies female cartoonists used to buck those stereotypes: Depicting “voting rights as a tool to end female oppression” and presenting “the idea that society as a whole lost out when women were excluded from the political process.”

In 1995, the Washington, DC-based National Museum of Women in Arts featured some of the cartoons Sheppard wrote about in an exhibit marking the 75th anniversary of the 19th Amendment. Political cartoonists for suffrage “knew that you can’t argue against a picture,” Sheppard told the Associated Press in an article previewing that exhibit.

For more on Sheppard’s book, see Google Books for some snippets. A 1997 issue of the academic periodical Woman’s Art Journal features a review of the book You can sign up for a JStor account and read the review for free. For more suffrage-themed cartoons, see the scholar Jaqueline McLeod Rogers’ article on the anti-suffrage cartoons of John Tinney McCutcheon and Newton McConnell. 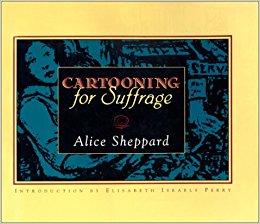