Gilded Suffragists: The New York Socialites who Fought for Women’s Right to Vote

In the early twentieth century over two hundred of New York’s most glamorous socialites joined the suffrage movement. Their names—Astor, Belmont, Rockefeller, Tiffany, Vanderbilt, Whitney and the like—carried enormous public value. These women were the media darlings of their day because of the extravagance of their costume balls and the opulence of the French couture clothes, and they leveraged their social celebrity for political power, turning women’s right to vote into a fashionable cause.
Although they were dismissed by critics as bored socialites “trying on suffrage as they might the latest couture designs from Paris,” these gilded suffragists were at the epicenter of the great reforms known collectively as the Progressive Era.  From championing education for women, to pursuing careers, and advocating for the end of marriage, these women were engaged with the swirl of change that swept through the streets of New York City.
Johanna Neuman restores these women to their rightful place in the story of women’s suffrage.  Understanding the need for popular approval for any social change, these socialites used their wealth, power, social connections and style to excite mainstream interest and to diffuse resistance to the cause.  In the end, as Neuman says, when change was in the air, these women helped push women’s suffrage over the finish line.

Reviews of the book:

Setting the record straight on the driving forces in the early-20th-century fight for women’s suffrage . . . Neuman counters the popular opinion that these women were merely “bored socialites trying on suffrage as they might the latest couture designs from Paris,” and she makes a solid case . . . Neuman concisely explains how these gilded women have been airbrushed out of history, resented by those who felt exploited, but thankfully, they succeeded, and women vote today because of them. —Kirkus Reviews

Gilded Suffragists can be purchased from its publisher’s website. 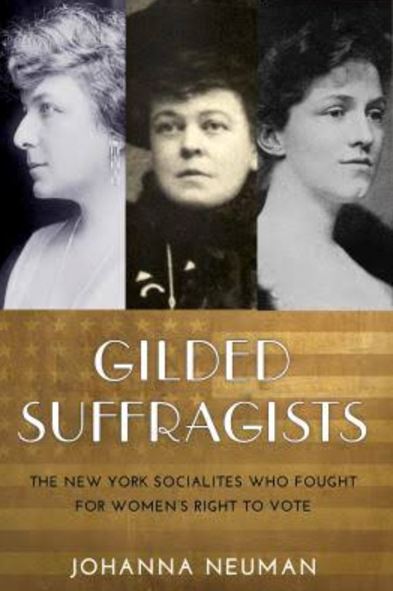