Suffrage and the Silver Screen

Suffrage and the Silver Screen explores how suffragists used the new medium of film to advance their cause.

In the 1910s, the American woman suffrage movement became a modern mass movement by using visual culture to transform consciousness and gain adherents. As part of this transformation, suffrage organizations produced several films and related cinematic projects, including four full-length, nationally distributed feature productions. This activist use was one of the first instances in the United States that a social movement recognized and harnessed the power of cinema to transform consciousness and, in turn, the social order. Suffrage and the Silver Screen discusses how the suffrage movement accomplished this formidable goal through analysis of the local and national uses of cinema by the movement. Amy Shore argues that these works must be considered as part of a political filmmaking tradition among feminists. The book contextualizes the films within the politics and practices of the suffrage organizations that produced them in order to understand and assess the strategic role of these films. By examining these works, the history of both suffrage and cinema is necessarily reconsidered and expanded. Suffrage and the Silver Screen is an essential resource for those studying early cinema, women and cinema, the woman suffrage movement, and the use of visual media in social movements.

You can buy an e-book version through the publisher’s website.

Kay Sloan’s documentary Suffragettes in the Silent Cinema may also be of interest to readers curious about this subject. 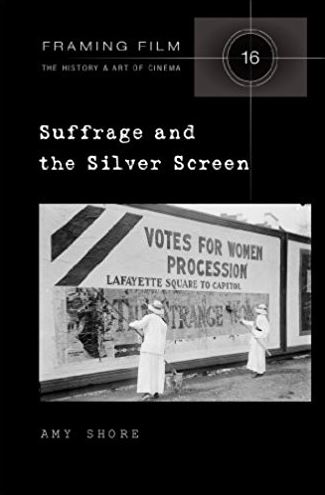