Selling Suffrage: Consumer Culture and Votes for Women looks at the intersection of consumer culture and suffrage tactics.

Margaret Finnegan’s pathbreaking study of woman suffrage from the 1850s to the Nineteenth Amendment in 1920 reveals how activists came to identify with consumer culture and employ its methods of publicity to win popular support through carefully crafted images of enfranchised women as “personable, likable, and modern.”

Drawing on organization records, suffragists’ papers and memoirs, and newspapers and magazines, Finnegan shows how women found it in their political interest to ally themselves with the rise of consumer culture–but the cost of this alliance was a concession of possibilities for social reform. When manufacturers and department stores made consumption central to middle-class life, suffragists made an argument for the ballot by comparing good voters to prudent comparison shoppers. Through suffrage commodities such as newspapers, sunflower badges, Kewpie dolls, and “Womanalls” (overalls for the modern woman), as well as pantomimes staged on the steps of the federal Treasury building, fashionable window displays, and other devices, “Votes for Women” entered public space and the marketplace. Together these activities and commodities helped suffragists claim legitimacy in a consumer capitalist society. Imaginatively interweaving cultural and political history, Selling Suffrage is a revealing look at how the growth of consumerism influenced women’s self-identity.

Excerpts of the book are available through GoogleBooks. You can purchase a copy of Selling Suffrage from its publisher, Columbia University Press. College and public libraries are also likely to have copies; check WorldCat to see if there is one near you. 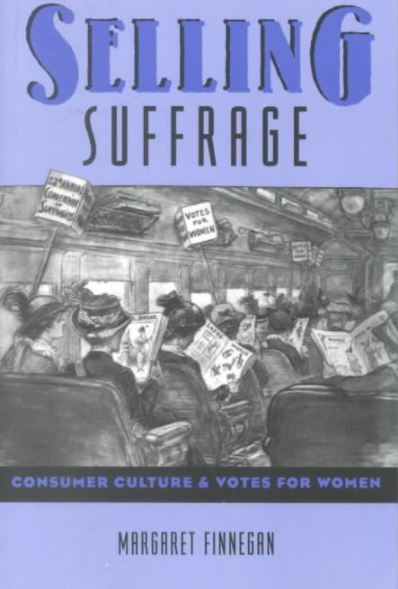