This Feminist Wednesday article by Taylor Ciambra delves into the history of the suffrage movement and the importance of the media in the 2016 election.

Ciambra links the history of the 19th Amendment with the recent trending of the hashtag #repealthe19th. #Repealthe19th surged in popularity on Twitter in early October 2016, when statistician Nate Silver of FiveThirtyEight.com posted a map of projections showing very different results if only men or only women voted in the 2016 election. His analysis suggested that if only men voted, Donald Trump would win the election by a landslide, and conversely, that Hillary Clinton would undoubtedly be president if only women voted. The hashtag was used by Trump supporters to show support for repealing the 19th Amendment. However, many others used the hashtag to express outrage at its use and to rally women to go out and vote, as this Washington Post article explains. 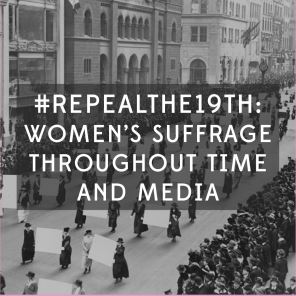