Johanna Neuman‘s new book, Gilded Suffragists: The New York Socialites who Fought for Women’s Right to Vote, tells the fascinating story of how the elite women of New York City took up the suffrage cause and ultimately helped the suffrage movement triumph in its quest for voting rights.

Alex Kane, a researcher for this website, interviewed Neuman, a historian and journalist, about her book and how the media covered pro-suffrage socialites.

Alex Kane: You describe how word of a debate on women’s suffrage at a meeting of the Colony Club, a women’s-only club started in the early 20th century, leaked to the media. Could you explain why such an event would be newsworthy–why newspaper readers would want to know about who was debating suffrage at the Colony Club?

Johanna Neuman: You can only imagine how excited I was when I found the statement from the Colony Club disavowing the leaking of a suffrage debate within its walls. The press release was pasted into the scrapbooks of Catherine Palmer Abbe, who had emerged as a suffrage leader during the 1894 constitutional amendment campaign. It confirmed several things for me.

One is that these elite women were the media darlings of their day, covered for every fad in attire, décor, entertainments and travel. With the city’s newspaper culture at its zenith—at the turn of the century New York boasted 29 daily newspapers and a vibrant immigrant press—everything they did and said provided ink. Newspapers began covering the wealthy as news in the 1880s, and readers seemed fascinated with every aspect of their lives. Perhaps this stemmed from the great disparity in social standing, or perhaps out of a longing for Horatio Alger rags-to-riches promise. In any event, when these figures of Society—until then known for hosting extravagant costume balls and commissioning Fifth Avenue mansions—embraced the women’s suffrage movement, it pushed coverage of their activities from the society pages to the news section and gave the movement enormous attention.

Second is that the very idea of a social club for women was threatening to men, because it violated the separate spheres that had so long ruled gender norms. Former President Grover Cleveland took to the pages of the Ladies Home Journal to proclaim that woman’s “best and safest club is her home.” One newspaper called the club a “Death Knell to the Home.” There was this fear that if women had a club of their own in the city, they might use it for illicit affairs and that men would no longer conscript the boundaries of their lives. So when word leaked that the Colony Club, billed as a social space, was also the site of debates over the most controversial political hot button issue of day – women’s suffrage — it was unsettling to men who had feared such a club would lead to emasculation of men. It was also upsetting to members of the Colony Club. They were taking their first steps into a debate over whether the vote would be good for women – wondering if it would rob them of their feminine moral authority or corrupt them with the stench of cigar-ridden politics. Most were not yet ready to announce their views in public. The issue was contentious between them and they insisted on privacy to keep discussing it.

AK: Newspapers loved to cover the socialites’ thoughts on suffrage. Did the widespread dissemination of high-society endorsements of suffrage impact how the wider American public thought about the issue? Was there any class resentment that turned into suffrage opposition as a result of the rich endorsing the cause?

JH: I don’t think newspapers loved covering their views on suffrage, but they did so because everything these social figures did and said was news. One of the assets these women brought to the campaign was an understanding that they could leverage the media’s interest in their appearance to promote the cause. Katherine Duer Mackay was one of the first women of Society to declare herself for suffrage, a woman of poise, beauty and social connections. Journalists accustomed to covering her as a social figure came to her suffrage events and always reported on what she was wearing and how her meeting rooms were decorated. But her secretary, Ethel Gross, noted that reporters who came “to cover her clothes” never left without quotes from her about the importance of the vote.

Class resentment was inevitable. The first political cause for many of the gilded suffragists was to join the New York garment industry strike in 1909-1910. At one point, labor leaders held a five-hour debate about whether to continue working with wealthy reformers, known as the Mink Brigade. Theresa Malkiel, a radical labor leader, accused them of “political crimes against the working class.” While some in the working class appreciated the support of these “women of leisure,” often crediting them in movement literature, others suspected these gilded suffragists were seeking the vote to increase their own influence, not to help fight for safety regulations and improved conditions in factories. Once the vote was won, they feared, elite supporters would lose interest in the reforms they were seeking.

As to the question of whether their involvement influenced others, one of my favorite anecdotes in the book is about a Canadian immigrant named Florence Nightingale Graham, who moved to New York and opened a beauty business. Changing her name to Elizabeth Arden, she largely eschewed politics. But in 1912, she stunned her staff by leaving her desk one day to join a suffrage parade on Fifth Avenue. Her biographers insist that she was not interested in the cause, but understood that her clients were. That was the sea change, when suffrage became popular among middle class women until then indifferent or even hostile.

AK: You write that newspapers derided suffrage activists as “masculine and vulgar,” but that their tone changed when covering elite women. Did that change in tone when covering these socialites’ support for suffrage transform newspaper coverage of the overall suffrage movement?

JH: News stories about the women’s suffrage movement in the 19th Century and early 20th Century contain lots of coded language, often suggesting that suffrage activists were masculine or unattractive, hinting that advocates were lesbians or spinsters. That line of attack was more difficult to justify with elite women, who were accustomed to brandishing feminine charms. There were a few pro-suffrage newspapers – the Boston Globe was a loyal supporter. Still, most newspapers did not embrace the cause, even if their tone softened. Some resorted to snarky comments ridiculing elite women’s call for more privileges.

The New York Times was adamantly against women’s suffrage always, and its editorials were especially coded. After a suffrage parade in 1912 that attracted women of diverse classes, “ the Times assailed “the refusal of woman to recognize his manhood as a title of supremacy in the world’s affairs.” The problem was not the “very small minority” of women who “have a natural inclination to usurp the social and civic functions of men.” It was this new generation of marchers, who were “young and personable, all … healthy and presumably intelligent.” The Times sought to shake men out of their complacency by questioning their manhood. “The situation is dangerous,” the paper editorialized. “We often hear the remark nowadays that women will get the vote if they try hard enough and persistently, and it is true that they will get it, and play havoc with it for themselves and society, if the men are not firm and wise enough and, it may as well be said, masculine enough to prevent them.”

AK: Did women ever convince their husbands to support suffrage, and was that ever covered in the press? If so, what impact did that support have on the conversation around suffrage?

JH: One of my chapters, “Mere Men,” discusses the biographies and motives of some of the key male suffragists. Many were husbands of women who were active in the movement. Others were progressives who thought, as writer Max Eastman did, that suffrage was “the great fight for freedom in my time.” Members of the Men’s League for Woman Suffrage, headed by James Lees Laidlaw, withstood enormous derision when they marched in the 1912 parade. “We had to laugh nearly all the way on account of the things that were shouted at us,” recalled Rabbi Stephen Wise. “For a few moments, I was very warm and took off my hat, whereupon someone shouted, ‘Look at the long-haired Susan.’ Some of the other delightful exclamations that greeted us were: ‘Who’s taking care of the baby? … Oh, Flossy dear, aren’t they cute? Look at the Mollycoddles.’ ” Still, Wise found the event uplifting, because while both male and female “rowdies” shouted insults, “the most hopeful thing” was the “respect (shown) by the intelligent class of people.” The male suffragists were careful not to usurp the leadership role of women, but they gave cover to other progressive men who were drawn to the cause. And in the end, of course, it was male voters who enfranchised women to vote in New York in 1917, and male lawmakers in Washington who enacted the 19th Amendment in 1919 and male legislators in various state capitols who ratified it in 1919 and 1920.

AK: In your research, did you ever detect concern among activists that press focus on what pro-suffrage socialites were wearing would distract from the substantive issue at hand?

JH: On the contrary, by 1910, after nearly a century of failed efforts to win the vote, mainstream suffrage leaders had determined that suffrage had to be sold, that how activists presented themselves was important to convincing a wavering or indifferent public. In part this was a deliberate effort to counteract the sneering of critics that suffrage activists were “mannishly or sloppily dressed.” As a result, leaders urged marchers in the 1911 suffrage parade on Fifth Avenue to “be neat and as modishly gowned as her purse will permit.” Noting that Alva Belmont and Katherine Mackay, two of the most prominent gilded suffragists, “always keep up with the fashions,” the National American Woman Suffrage Association reasoned, “The well-groomed, attractive matron or maid…has more influence over both sexes on the speakers’ platform or in personal conversation than her out-at-elbows sister.”

AK: Do you think the ways in which celebrities boosted the movement holds lessons for modern day social movements and how they might interact with celebrity endorsements?

JH: It is always risky to extrapolate lessons for our age from history. But I would say that what is notable about the Progressive Era – especially about the women’s suffrage campaign – is that the cause attracted a great array of classes marching together under one large tent. When Elizabeth Cady Stanton first proposed in 1848 that American women get the vote, the idea was so controversial that her husband Henry, a New York legislator, boycotted the Seneca Falls convention for fear he would be ridiculed. By the time women were enfranchised in New York in 1917 and nationally in 1920, women and men of many classes had joined the movement to demonstrate the breadth of support for a cause once considered radical. In the parades that became an iconic symbol of that campaign, delegations of nurses, librarians, actresses, lawyers, factory workers, women of leisure, academics, labor leaders, department store clerks, even men marched in contingents meant to display visually that everyone was for the cause. For me, this assertion of diverse interests around a single cause was a spectacular demonstration of how social change was made, and how public opinion changed. Would such a cross-class, multi-gender approach benefit the causes of our times? That question I would leave to the good sense and thoughtful opinions of your readers. 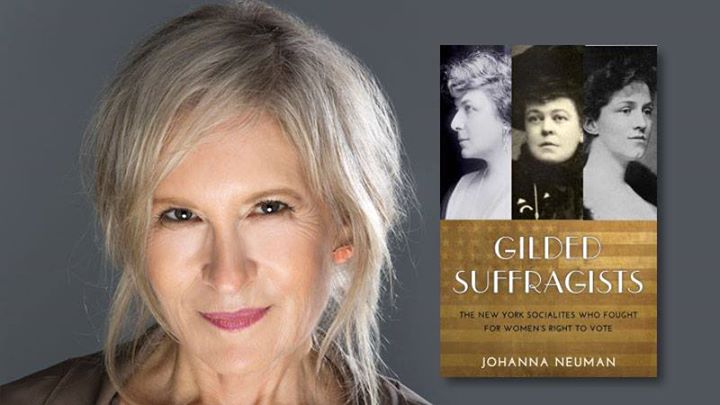