In Funding Feminism: Monied Women, Philanthropy, and the Women’s Movement, 1870–1967, historian Joan Marie Johnson dives deep into the world of wealthy women and the activist causes that benefited from their money.

She argues that female philanthropy was an expression of women’s political power at a time when they had very little, and that the cash they delivered to everyone from suffrage organizations to birth control advocates shaped the trajectory of those groups and causes.

Alex Kane, a researcher for this website, interviewed Johnson about how philanthropy impacted the suffrage movement and media that covered the fight for women’s voting rights.

Alex Kane: Given that the suffrage movement occurred before women entered the workforce in a widespread manner, where did the monied women who funded the suffrage cause get their money from?

Joan Marie Johnson: Most of the wealthy women in the book inherited their fortunes, from their fathers or from their husbands. What makes their giving to the women’s movement so fascinating is that despite their enormous privilege, and these were very wealthy white women, they still experienced discrimination as women. Sometimes it was in their families, where they were not allowed to go to college or work in the family business like their brothers. Sometimes they felt abused by husbands, who cheated on them. They did not feel financially independent until their husbands died, and sometimes even afterwards, when brothers, lawyers, or their husbands’ former business associates still controlled their money. Thus, despite their privilege they understood that it was essential to use their money to fund efforts to make change for women and bring about gender equality, and saw themselves as united with other women.

AK: Activist organizations are often competing against each other for similar sources of funding. What did your research tell you about this dynamic, and how did it impact the suffrage movement?

JMJ: My research uncovered both competition for similar sources of funding as well as cooperation and networking. For example, in the woman suffrage movement, leaders of the larger and more moderate National American Woman Suffrage Association (NAWSA) were incensed when Alice Paul and the new, more militant Congressional Union (which became the National Women’s Party) began fund-raising for a parade in Washington, DC. They complained that Paul was duping NAWSA supporters into giving to her instead. But there was also substantial cooperation. Many of these women knew each other socially, and they tapped their friends and neighbors for participation and contributions. The women’s movement benefitted from their social network, which informally built a circle of women who gave to these causes. There were also more formal efforts to organize nationally, with leaders in various cities each expected to bring a number of women in. In this sense, I would argue that the suffrage movement benefitted more from social networks than it suffered from competition.

AK: Did the wealthy women philanthropists you researched give money that went towards suffrage publications--and if so, did they have influence over the editorial direction of those publications?

JMJ: The women philanthropists I studied were very interested in publicity, especially in having their own publications, as Susan B. Anthony said, so they could “sauce back” their opponents. Most newspapers were not promoting woman suffrage, so they had to create to their own publications. NAWSA took over a long-running magazine, The Woman’s Journal, had to give it up because it was losing so much money, and then, as soon as they had the funding, bought it back and combined it with other publications to create a new magazine, Woman Citizen. The money for this came from a million dollar bequest left to Carrie Chapman Catt, the NAWSA president, by Mrs. Frank Leslie. She left her estate for Catt to spend however she liked, leaving Catt free to shape the editorial direction of the magazine.

AK: Did the money that flowed into suffrage organizations increase their ability to generate press attention? What were the most effective tactics these organizations used to get the press to cover them?

JMJ: The money flowing in and the women who gave it drew enormous press attention to the movement. The spectacle of wealthy society women speaking out publicly for woman suffrage was enough to garner press attention, especially from the New York Times, which was against woman suffrage. But even more importantly, they understood that educating the public and changing public opinion was essential to winning the vote. When Alva Vanderbilt Belmont became involved in NAWSA, she gave a large contribution – to pay for moving from Warren, Ohio, to a new headquarters in New York City where they could get more publicity and begin hiring publicists. Catt then spent a large portion of the Leslie bequest to fund 25 full time publicists who provided editorials, cartoons, statistics, features, silent movies, and the magazine. In addition, they financed more elaborate, attention-getting events like parades and the White House pickets.

AK: Alva Belmont, one of the wealthy pro-suffrage women you write about, had a column in the Chicago Tribune. What impact did her columns have?

JMJ: Alva Belmont’s column was particularly interesting because she wrote quite forcefully about women’s need for independence, the failings of men to protect women, the needs of working class women, and many other issues. She was very outspoken, and as one of the wealthiest and most elite women in New York, it was remarkable for her to have such an explicitly feminist column. 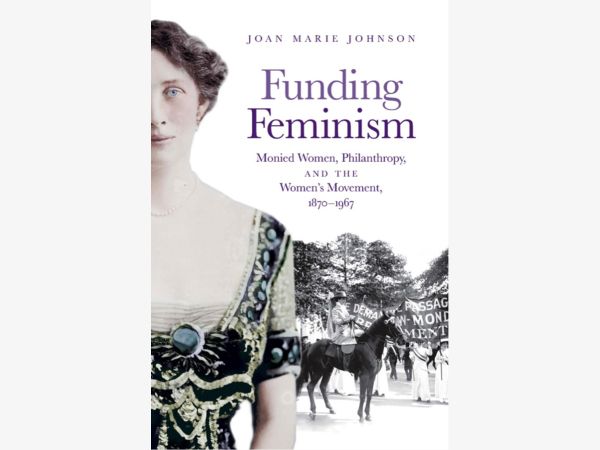