How it Feels to be the Husband of a Suffragette

Him; Illustrations by May Wilson Preston. How it Feels to be the Husband of a Suffragette. New York: George H. Doran Company [c1915].

This ironic, self-deprecating parody of a how-to guide is written from the perspective of an anonymous male suffragist—referred to only as “Him”—who is married to a woman suffragist.

Humorously long-suffering in its style, this brief book appears aimed at men who harbored vague sympathies for the suffragist cause but hadn’t given the issue much thought. “Him” uses often jokes to address common characterizations of suffragists’ husbands as henpecked, emasculated losers forever “tagging after the girls” (8). The book also offers some more serious digressions, however, such as this one in which the author assures readers that their wives will still be “theirs,” even if they become suffragists:

Personally, we—I and mine—fell into suffrage together and practically made only one splash; but it was long after we were married. You notice that I said mine. I meant it. Sharing some common things in common doesn’t necessarily prevent the lady from being all yours (20).

In a similar passage later in the book, the author uses humor (of a sort more likely to tickle an average male reader than his woman suffragist counterpart) to confront one very widespread argument against giving women the vote:

A great many people fear that giving a woman her honest equal rights in the world’s work is bound to make her act mannish, even if she doesn’t go to the length of militancy. My experience is that so far as it has been tried out it merely makes her act a little more like a gentleman (59-61).

Though its frequently patronizing boys-club tone may irk modern readers, How it Feels to be the Husband of a Suffragette was a clever piece of propaganda. The book’s rhetoric plays on a presumed simpatico between men in order to reassure male readers discomfited by the sea-change in politics and gender relations brought about by the suffrage movement. And though its stated purpose is to reassure such men and win them over to the cause, How it Feels to be the Husband of a Suffragette is unsparing in its criticism of opposition to women’s rights. After all, when “a man has lived in the same house with a suffragette for a number of years, he is likely to have a severe disesteem for all forms of excuse or apology” (10).

How it Feels to be the Husband of a Suffragette is just one of hundreds of fascinating resources housed in the Library of Congress NAWSA Collection, which also includes pamphlets, newspapers, posters, and photographs.

For more on the contributions prominent men made to the women’s suffrage movement, see Brooke Kroeger’s 2017 book, The Suffragents: How Women Used Men to Get the Vote. 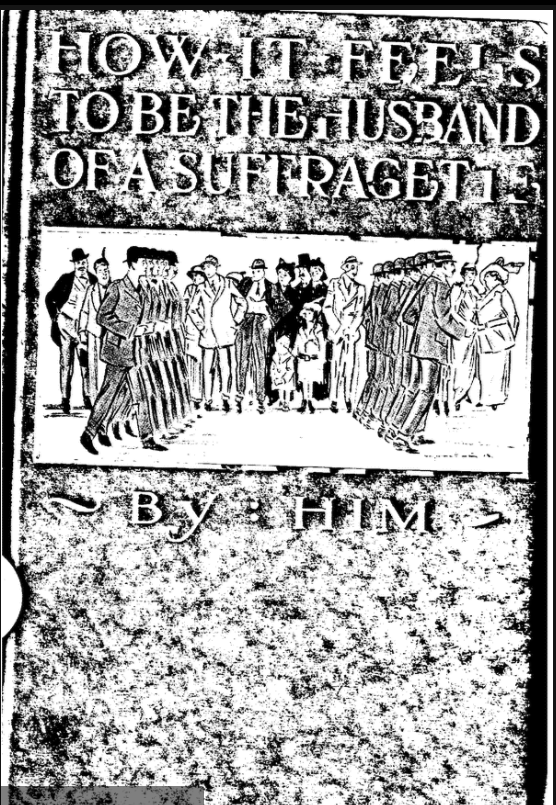