Exhibit: When Greenwich Village Was a Suffrage ‘Hotbed’

“Hotbed,” a new exhibit at the New-York Historical Society, explores how Greenwich Village, a neighborhood on the west side of lower Manhattan, served as a hub for suffragist activity in the early 20th century.

The exhibit features over 100 items that spotlight the feminist spirit of activists who congregated in Greenwich Village and fought for suffrage. “Hotbed” “bring[s] to life the bohemian scene and its energetic activist spirit,” the New-York Historical Society says on its website.

In a New York Times write-up of the museum exhibit, Melissa Smith reports that the museum collection makes the case that the figures who gathered in Greenwich Village were a key reason why the suffrage cause’s popularity grew in size in the early 20th century.

The political radicals who lived there were mainly middle class and educated, and for them dignity took on a new meaning as the key element in the fight for equal rights for women. From 1908 to 1915, these figures worked to persuade women that they had to stop behaving so much like ladies.

Other galleries show how suffrage activists’ embrace of other causes boosted their own ranks, and how World War I and race divided the suffrage movement.

You can buy tickets here. 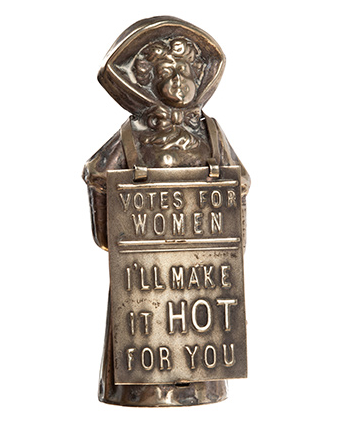