Campaign Ad for Harry Burn, the Republican Who Cast the Deciding Vote for Suffrage in Tennessee

Harry Burn was a Republican elected to the Tennessee General Assembly in 1918. Two years later, Burn got the chance to participate in the monumental struggle over whether to ratify the 19th Amendment, which granted women the right to vote.

Tennessee was the 36th state to vote on the amendment—and if legislators passed it there, the amendment would become the law of the land in the United States.

By the time Burn had to make his choice, the vote was 48-48. The History Channel narrates what happened next:

To the dismay of the many suffragists who had packed into the capitol with their yellow roses [a symbol of suffrage support], sashes and signs, it seemed certain that the final roll call would maintain the deadlock. But that morning, Harry Burn—who until that time had fallen squarely in the anti-suffrage camp—received a note from his mother, Phoebe Ensminger Burn, known to her family and friends as Miss Febb. In it, she had written, “Hurrah, and vote for suffrage! Don’t keep them in doubt. I notice some of the speeches against. They were bitter. I have been watching to see how you stood, but have not noticed anything yet.” She ended the missive with a rousing endorsement of the great suffragist leader Carrie Chapman Catt, imploring her son to “be a good boy and help Mrs. Catt put the ‘rat’ in ratification.”

Still sporting his red boutonniere [a symbol of suffrage opposition] but clutching his mother’s letter, Burn said “aye” so quickly that it took his fellow legislators a few moments to register his unexpected response. With that single syllable he extended the vote to the women of America… 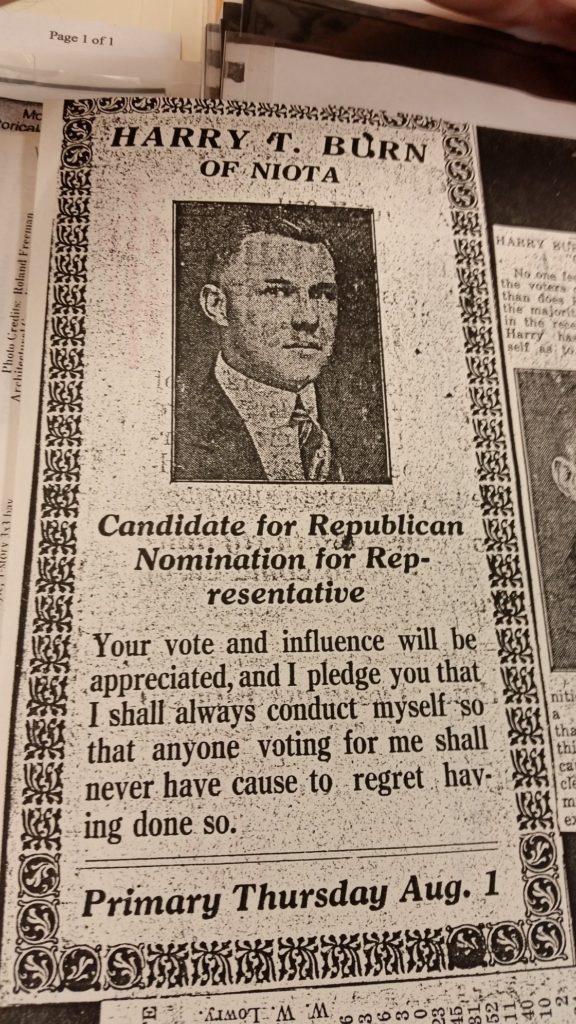