BOOKS: NEW in 2020 for the SUFFRAGE CENTENNIAL 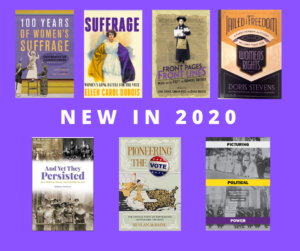 Here are the publishers’ links to three new books for 2020, timed to the suffrage centennial celebrations and their publishers’ descriptions.

“Honoring the 100th anniversary of the 19th amendment to the Constitution, this exciting history explores the full scope of the movement to win the vote for women through portraits of its bold leaders and devoted activists. Distinguished historian Ellen Carol DuBois begins in the pre-Civil War years with foremothers Lucretia Mott, Elizabeth Cady Stanton, Susan B. Anthony, and Sojourner Truth as she explores the links of the woman suffrage movement to the abolition of slavery. After the Civil War, Congress granted freed African American men the right to vote but not white and African American women, a crushing disappointment. DuBois shows how suffrage leaders persevered through the Jim Crow years into the reform era of Progressivism. She introduces new champions Carrie Chapman Catt and Alice Paul, who brought the fight into the 20th century, and she shows how African American women, led by Ida B. Wells-Barnett, demanded voting rights even as white suffragists ignored them. DuBois explains how suffragists built a determined coalition of moderate lobbyists and radical demonstrators in forging a strategy of winning voting rights in crucial states to set the stage for securing suffrage for all American women in the Constitution. In vivid prose DuBois describes suffragists’ final victories in Congress and state legislatures, culminating in the last, most difficult ratification, in Tennessee.DuBois follows women’s efforts to use their voting rights to win political office, increase their voting strength, and pass laws banning child labor, ensuring maternal health, and securing greater equality for women. Suffrage: Women’s Long Battle for the Vote is sure to become the authoritative account of one of the great episodes in the history of American democracy.”

Johanna Neuman (Wiley-Blackwell)AND YET THEY PERSISTED: How American Women Won the Right to Vote

“A comprehensive history of the women’s suffrage movement in the United States, from 1776 to 1965. Most suffrage histories begin in 1848, when Elizabeth Cady Stanton first publicly demanded the right to vote at the Women’s Rights Convention in Seneca Falls, New York. And they end in 1920, when Tennessee became the 36th state to ratify the 19th Amendment, removing sexual barriers to the vote. And Yet They Persisted traces agitation for the vote over two centuries, from the revolutionary era to the civil rights era, excavating one of the greatest struggles for social change in this country and restoring African American women and other women of color to its telling. In this sweeping history, author Johanna Neuman demonstrates that American women defeated the male patriarchy only after they convinced men that it was in their interests to share political power. Reintegrating the long struggle for the women’s suffrage into the metanarrative of U.S. history, Dr. Neuman sheds new light on such questions as: Why it took so long to achieve equal voting rights for women? How victories in state suffrage campaigns pressured Congress to act? Why African American women had to fight again for their rights in 1965? How the struggle by eight generations of female activists finally succeeded? And Yet They Persisted: How American Women Won the Right to Vote is the ideal text for college courses in women’s studies and history covering the women’s suffrage movement, as well as courses on American History, Political History, Progressive Era reforms, or reform movements in general.”

“The press, women, and the long road to the Nineteenth Amendment. Suffragists recognized that the media played an essential role in the women’s suffrage movement and the public’s understanding of it. From parades to going to jail for voting, activists played to the mass media of their day. They also created an energetic niche media of suffragist journalism and publications. This collection offers new research on media issues related to the women’s suffrage movement. Contributors incorporate innovative approaches to social movement, media theory, and historiography while discussing the vexed relationship between the media and debates over suffrage. Aiming to correct past oversights, the editors curate essays on overlooked topics like the participation of African American and Mormon-oriented media, coverage of black women in the movement, suffrage-related historiography, suffragist rhetorical strategies, elites within the movement, suffrage as part of broader campaigns for social transformation, and how views of white masculinity influenced press coverage.Contributors: Maurine H. Beasley, Sherilyn Cox Bennion, Jinx C. Broussard, Teri Finneman, Kathy Roberts Forde, Linda M. Grasso, Carolyn Kitch, Brooke Kroeger, Linda J. Lumsden, Jane Marcellus, Jane Rhodes, Linda Steiner, and Robin Sundaramoorthy. From Susan Ware, author of Why They Marched: Untold Stories of the Women Who Fought for the Right to Vote: “The centennial of the Nineteenth Amendment encourages a fresh rethinking of the history of the women’s suffrage movement, to which this volume is a welcome addition. Special kudos for its sustained attention to racial and regional diversity, as well as its broad chronological sweep.”

The 100th-anniversary special edition of Jailed for Freedom, the essential history and first-person account of the courageous and militant suffragists who fought for their right to vote.
“First published in 1920, Jailed for Freedom is the courageous, true story of the militant suffragists who organized some of the first-ever, large scale demonstrations and protests on Washington. At a time when President Woodrow Wilson’s administration refused to acknowledge women’s voting rights as a tangible issue, the National Woman’s Party coalesced, organized, and fought a fierce battle for the ratification of the Nineteenth Amendment with heroism, bravery, and radical vigilance.
“What makes Jailed for Freedom especially compelling and such an important contribution to women’s history is that it is a personal testimony from a suffragist who persevered through it. With depth and clarity, Doris Stevens details the bravery of the women who picketed daily outside the White House, opened themselves up to ridicule and physical violence, were arrested on no viable charges, jailed when they chose not to pay fines, and even beaten and force-fed when they went on hunger strikes.
“Including a new introduction from suffrage historian Angela P. Dodson, author of Remember the Ladies, and accompanied with poignant, archival illustrations, Jailed for Freedom is a tribute to the women and acts it took the pass the Nineteenth Amendment, apropos of radical activism that is still mobilizing in politics today.”

“For as long as women have battled for equitable political representation in America, those battles have been defined by images—whether illustrations, engravings, photographs, or colorful chromolithograph posters. Some of these pictures have been flattering, many have been condescending, and others downright incendiary. They have drawn upon prevailing cultural ideas of women’s perceived roles and abilities and often have been circulated with pointedly political objectives.

Picturing Political Power offers perhaps the most comprehensive analysis yet of the connection between images, gender, and power. In this examination of the fights that led to the ratification of the Nineteenth Amendment in 1920, Allison K. Lange explores how suffragists pioneered one of the first extensive visual campaigns in modern American history. She shows how pictures, from early engravings and photographs to colorful posters, proved central to suffragists’ efforts to change expectations for women, fighting back against the accepted norms of their times. In seeking to transform notions of womanhood and win the right to vote, white suffragists emphasized the compatibility of voting and motherhood, while Sojourner Truth and other leading suffragists of color employed pictures to secure respect and authority. Picturing Political Power demonstrates the centrality of visual politics to American women’s campaigns throughout the nineteenth and early-twentieth centuries, revealing the power of images to change history.”

100 Years of Women’s Suffrage commemorates the centennial of the Nineteenth Amendment by bringing together essential scholarship on the women’s suffrage movement and women’s voting previously published by the University of Illinois Press. With an original introduction by Nancy A. Hewitt, the volume illuminates the lives and work of key figures while uncovering the endeavors of all women—across lines of gender, race, class, religion, and ethnicity—to gain, and use, the vote. Beginning with works that focus on cultural and political suffrage battles, the chapters then look past 1920 at how women won, wielded, and continue to fight for access to the ballot.

A curation of important scholarship on a pivotal historical moment, 100 Years of Women’s Suffrage captures the complex and enduring struggle for fair and equal voting rights.

“From the brutal imprisonment narratives that roused a nation’s sympathies to the suffragists’ plight to the ‘gender gap’ in contemporary voting, this text is a rich collection of University of Illinois Press works on the American women’s suffrage quest and its aftermath. 100 Years of Women’s Suffrage highlights rarely discussed regional and racial approaches in the fight for women’s ‘first class citizenship’ through a fascinating mix of primary accounts and historical and gender studies essays. A recommended anthology that rightly honors the Nineteenth Amendment’s centennial.”–Michelle R. Scott, author of Blues Empress in Black Chattanooga: Bessie Smith and the Emerging Urban South

“Offering a unique and creative way to reflect on the suffrage movement, this anthology includes a full gamut of suffrage-related topics and controversies. This collection from years of scholarship from some of the most important scholars of women and voting will enrich our understanding of the subject in all its diversity and range. In revisiting the arguments, it will assuredly prompt new scholarship on the movement.”–Susan Goodier, coauthor of No Votes for Women: The New York State Anti-Suffrage Movement

Neylan McBaine (ShadowMountain) PIONEERING THE VOTE: The Untold Story of Suffragists in Utah and the West

PIONEERING THE VOTE tells the remarkable, largely unknown story of the suffrage victories that happened in the American West. With the encouragement of their Eastern sisters, women from Colorado, Wyoming, Idaho, Montana, and Utah organized into one group whose goal was to win the right to vote, state by state. This culminated in May of 1895 when 8,000 people–including East Coast suffragists Susan B. Anthony and Reverend Anna Howard Shaw–attended the Rocky Mountain Suffrage Convention in Salt Lake City, Utah. This book brings together the stories of those influential Western women. McBaine contributed this commentary to the Deseret News on the importance of efforts beyond the eastern seaboard.