Katherine H. Adams and Michael L. Keene’s book Alice Paul and the American Suffrage Campaign tells the story of the rhetorical and activist strategies Alice Paul pioneered during the fight for suffrage.

Past biographies, histories, and government documents have ignored Alice Paul’s contribution to the women’s suffrage movement, but this groundbreaking study scrupulously fills the gap in the historical record. Masterfully framed by an analysis of Paul’s nonviolent and visual rhetorical strategies, Alice Paul and the American Suffrage Campaign narrates the remarkable story of the first person to picket the White House, the first to attempt a national political boycott, the first to burn the president in effigy, and the first to lead a successful campaign of nonviolence.

Katherine H. Adams and Michael L. Keene also chronicle other dramatic techniques that Paul deftly used to gain publicity for the suffrage movement. Stunningly woven into the narrative are accounts of many instances in which women were in physical danger. Rather than avoid discussion of Paul’s imprisonment, hunger strikes, and forced feeding, the authors divulge the strategies she employed in her campaign. Paul’s controversial approach, the authors assert, was essential in changing American attitudes toward suffrage.

Of particular interest to readers of this website may be chapter three, which chronicles Paul’s 1913 founding of Suffragist, a journal with striking political cartoons that advocated for the passage of a federal amendment to grant women voting rights. It was published originally with the backing of the National American Woman Suffrage Association (NAWSA), though after Paul split from the association over strategic differences, the paper was published with the backing of the Congressional Union for Woman Suffrage, and later, the National Woman’s Party, with which the Union eventually merged.

The fourth chapter details the parades for suffrage that Paul organized, with a focus on their symbolism and how they looked to the crowds watching them. The chapter also goes into the newspaper coverage of Paul’s suffrage parades and protests, with a focus on the famous 1913 parade in Washington, DC.

You can purchase the book from the publisher, or read it on JStor or at a library near you. You can also read excerpts on Google Books.

For more about Alice Paul, see this website’s entry on the film Iron Jawed Angels. 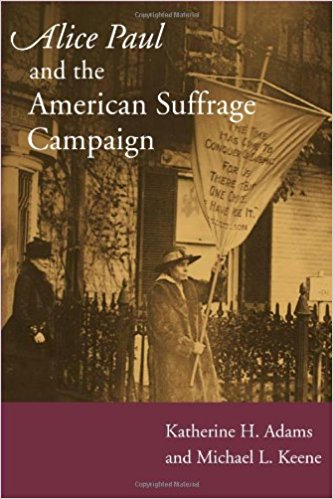