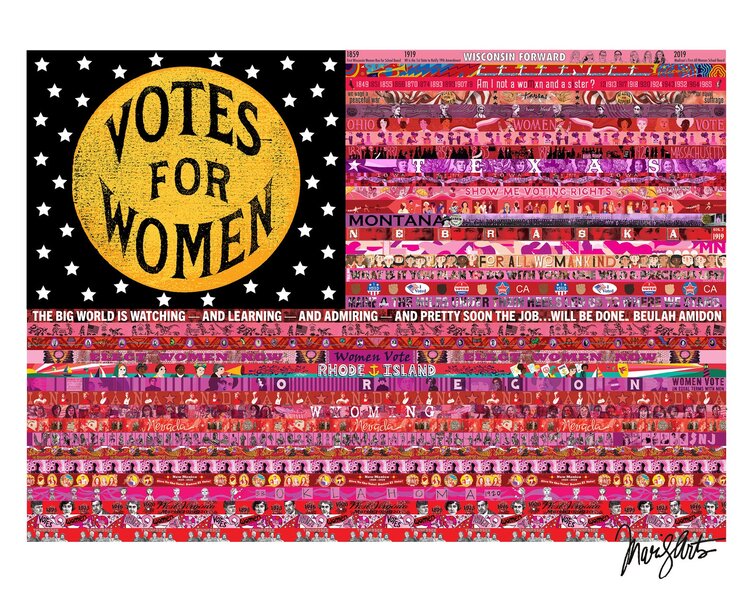 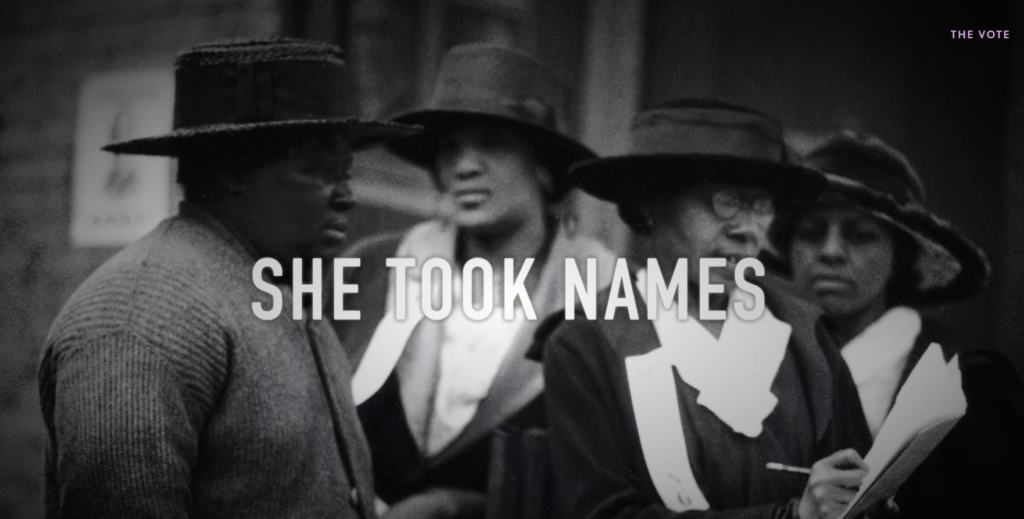 As part of their American Experience documentary series on U.S. history, PBS has created an online interactive experience that uses video, audio and primary sources to explore the different methods used by suffrage activists. In addition to illustrating the different forms of events, publications and demonstrations that contributed to the movement, the site also features an interactive map that shows the shows the suffrage timeline state by state. 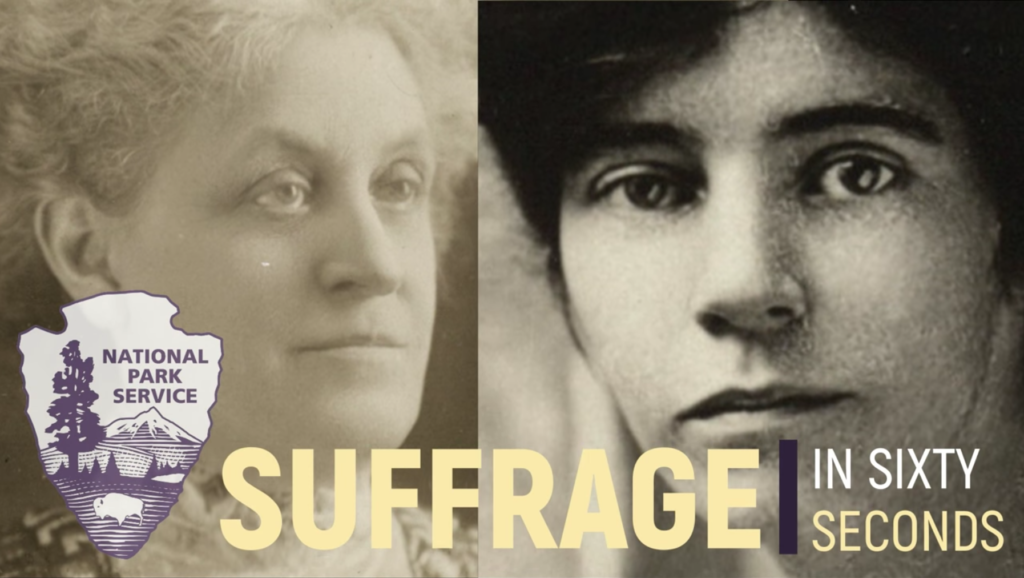 DOCUMENTARY: The Nineteenth Amendment: A Woman’s Right to Vote

“Voting is the most basic right of a citizen and the most important right in a democracy. When you vote, you are choosing the people who will make the laws. For almost a century and a half of our nation’s history, women were barred from exercising this fundamental right. This is a film about their long, difficult struggle to win the right to vote. It’s about citizenship, the power of the vote, and why women had to change the Constitution with the 19th Amendment to get the vote.” This documentary features Supreme Court Justice Ruth Bader Ginsburg and others and runs 25 minutes. The Annenberg website has additional resources and is found here.

From the YouTube post: “This is a full-length, 45 minute feature chronicling the lives of 22 Howard University women, members of the Delta Theta Sigma sorority, who marched in the Women’s Suffrage March of 1913. “The Black Sorority Project: The Exodus” is a 2006 film by Derek Forjour and Jamar White.

The slideshow includes historical background on the push for women’s suffrage in the UK, but its particular focus is the way in which suffragettes used film—then a silent, nascent medium—to further their cause. As the BFI puts it, Dixon “explores how the BFI’s collections highlight the passion and media savvy of the suffragettes’ struggle, offering a fascinating portrait of British women during this time.”

Dixon examines more than just suffragettes’ use of film, however; she also looks at their portrayal in non-suffragist movies from the era, and the slideshow includes short clips of some of the most famous examples of suffrage in early film, making it a useful—if compact—primary-source guide.

This Vanity Fair  video by director Gilly Barnes is short—at just under four minutes, it’s closer in length to a film trailer than a typical documentary—but packs in a lot of information.

Part of the “1910s” portion of Vanity Fair‘s centennial “Decades Series,” the video combines suffrage-era primary sources like photos, quotes, and newspaper clippings with dramatic reenactments of a suffragist narrator explaining how she discovered the cause.

Though perhaps too condensed to be much use to viewers already steeped in the history of the American suffrage movement’s final decade, the video is a good introduction to the topic, and places it neatly within its historical context.

This description of the “Decades Series” comes from the project’s YouTube page:

Ten decades, 10 directors. In celebration of V.F.’s 100th anniversary, 10 eclectic filmmakers—from Judd Apatow to Don Cheadle to Brett Ratner—created a film on each era of V.F.’s century-old history and the Zeitgeist that defined it.

The Perfect 36: When Women Won the Vote is a historical TV documentary that tells the story of Tennessee’s crucial role in the adoption of the 19th Amendment.

Of all the battles waged on Nashville’s doorstep, the final throes for the passage of the 19th Amendment were among the most heated, controversial, and colorful. In July of 1920, all eyes were on the Tennessee capital as Anti and Pro-suffragists each fought for their vision of a socially evolving United States. Foul play and coercion were all fair in this game of high stakes. One more state was needed to ratify the proposed amendment, and that duty rested solely on the shoulders of Tennessee. On a sweltering August 18, 1920, the House convened. After two consecutive 48-48 outcomes to table the resolution, it was put to vote. The votes were coming in neck and neck. At the last, a 24-year-old freshman representative, by the name of Harry Burn, swung his vote, and changed history forever, making Tennessee the deciding 36th state to enable passage of the 19th Amendment, granting women the Constitutional right to vote.

The trailer as well as more information is available on The Perfect 36 website. You can find screening schedules on the American Public Television website.

Centennial Park in Nashville houses a life-size sculpture commemorating Tennessee suffragists. The sculpture, created by Alan LeQuire, includes five women who were involved in Tennessee’s ratification of the 19th Amendment. There is also a historical marker remembering the suffragists at the Hermitage Hotel in Nashville (picture below).

Outside City Hall in Jackson, Tennessee, you can also find the Sue Shelton White statue, dedicated May 2017 (picture below). “Miss Sue” was an attorney who was jailed at the Occoquan Workhouse for picketing the White House with the National Woman’s Party. She was instrumental in helping Alice Paul draft the first version of the Equal Rights Amendment.

This short documentary, narrated by Bonnie Franklin, tells the history of the suffragist political campaign that resulted in California becoming the first US state to grant women the right to vote, setting the stage for similar efforts across the country, and culminating in the 1920 ratification of the 19th Amendment, which granted voting rights to women nationwide.

The following description comes from IMDb:

Using both historical materials and live re-enactments, this film presents the dramatic suffrage campaign that won the Women of California the Right to Vote nine years before the Federal amendment. The Campaign becomes a role model and motivation for the rest of the country. Today the tactics and spirit of these women are a guide and inspiration for citizen activism in a democratic society. No Matter from what state you hail, this right to vote battle shows how to embrace diversities and interests for a common cause. This is history and personalities, art and argument, a foundation of civil rights here and throughout the world.

You can purchase various DVD versions of the documentary here, via the publisher, Ishtar Films. Ishtar Films also produced a “Study Guide” for those interested in using the film as a teaching resource.

For more on suffrage in the early years of the silver screen, see Kay Sloan’s documentary Suffragettes in the Silent Cinema.

While not quite propaganda, this classic 1913 silent film (also—and perhaps more commonly—known as “What 80 Million Women Want”) had a clear political message: Allow women to vote—doing so might just clean up politics.

The film stars Ronald Everett as Will Travers, a struggling young lawyer, and Ethel Jewett as his plucky fiancé, Mabel West. When Will gets involved with corrupt district leader Boss Kelly (George Henry), he finds himself falsely accused of shooting the crooked Boss. With most of the town’s dirty politicians thoroughly wrapped around Boss Kelly’s finger, it’s up to Mabel to clear her betrothed. Luckily, she’s well placed to do so: At the behest of the New York Women’s Political Union, whose leadership Boss Kelly infuriated by denouncing suffragists to the press, Mabel has already infiltrated the Boss’s racket by posing as a secretary. Without giving away too much of the plot, Mabel clears Will’s name and brings down a corrupt politician along the way.

Though it featured big-name appearances by suffragists Emmeline Pankhurst and Harriot Stanton Blatch (the real-life president of the New York Women’s Political Union), critics often pan the film, criticizing its garbled plot, its uninspired cinematography, and the fact that the story’s connection to its titular suffragist cause is oblique and unconvincing.

Whatever its aesthetic shortcomings, “80 Million Women Want—?” offers a valuable window into how the suffrage movement tried to market itself to the cinema-going public, and it includes actual footage of suffrage rallies.

The film can be difficult to find, but a DVD version is available via Amazon.com (Potential viewers should note that the quality of the restored film is marginal). You can access the film via a college or public library account through the Kanopy films website (you can check if you have access through the site directly by clicking the “watch now” button). Public and college libraries may also have access to the film through other streaming subscription services. You can check WorldCat to see if there is a library with access to the film near you.

You can view several discrete clips from the movie in the video below.

For more on suffrage and the silver screen, see Kay Sloan’s documentary Suffragettes in the Silent Cinema.